History of the Outlet Channel

In 1973, citizens first petitioned the Prior Lake-Spring Lake Watershed District to construct a stormwater outlet from the landlocked Prior and Spring lakes. That year, a feasibility study concluded that a pipe outlet should be constructed as a relief valve to carry approximately 50 cubic feet per second of water downstream and areas should be acquired and reserved for ponding purposes. Due to numerous complications, the outlet structure and outlet channel were not completed until July 1983, ten years after the initial citizen petition. Unfortunately, two 100-year storm events occurred in March of that year, before the Channel was completed. Spring Lake Dam was sandbagged, and homes were flooded. Spring Lake Dam has only had to be sandbagged twice since then, in 1993 and 2014. 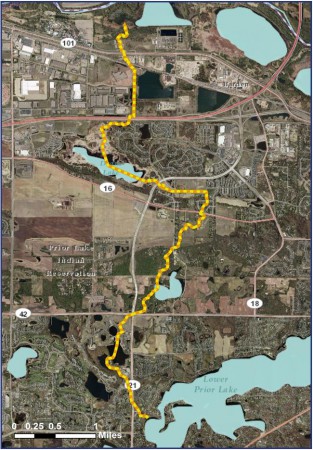 The Prior Lake Outlet Channel is seven miles long. It starts at Lower Prior Lake and discharges into the Minnesota River in Shakopee.

Journey to the Minnesota River

The outlet channel leaves Lower Prior Lake through the outlet structure on the southwestern side of the lake, beginning its seven mile journey to the Minnesota River through a quarter mile underground pipe.

The pipe outlets in a wetland near Jeffers Pond Elementary and travels north through Jeffers Pond. The channel then travels under County Road 42 and flows north through Pike Lake. The channel continues to flow north, eventually passing through Dean Lake before completing its northward journey and emptying into the Minnesota River via Blue Lake near Valleyfair.

Normal wear and tear on the outlet structure resulted in cracking to the structure and diminishing efficiency. In 2007, partners and advisers developed a strategy and plan for updating the outlet system called the Multi-year Outlet and Channel Improvement Project.

The outlet structure was replaced in 2010, with an accordion-shaped fixed crest weir and a low flow gate, allowing manual discharge of water between 902.0 feet (with a permit from the DNR for March-April) and 902.5 feet.

A Memorandum of Agreement (MOA) was signed between the City of Prior Lake, the City of Shakopee, the Shakopee Mdewakanton Sioux Community and the Prior Lake-Spring Lake Watershed District in 2007 and updated in 2019. This group of cooperators oversees the operation of the PLOC, while the District administers channel operations.

Acknowledging that the PLOC is used as a stormwater conveyance system and is not just a natural conveyance, the MOA cooperators’ focus is to manage the easements of the channel and the channel itself to maintain hydrologic capacity, reduce maintenance needs, provide long-term stability and improve water quality. Secondary benefits include increased aesthetics, providing improved habitat and providing consistency with city and county plans for parks and greenways.

June 2014 saw record rainfalls, totaling 13.01 inches over 20 days, which caused serious flooding on Spring and Prior Lakes and damaged the outlet channel. During the 2014 flood, the outlet structure operated continuously. The extreme velocity and duration of flow in the channel during the flood caused unavoidable damage throughout the channel, including over 20,000 feet of bank erosion, sediment deltas, damaged culverts and fallen trees. The damage in the channel took several years to repair with assistance from FEMA.

Check out these YouTube videos from the PLSLWD mini-series: Citizens Create a Watershed District & The Outlet Structure for Prior Lake.