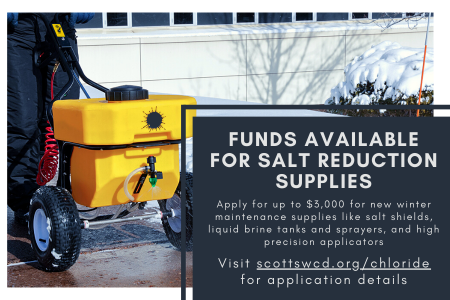 The Winter Maintenance Workshop for homeowners was last week, but don’t worry if you missed it because it’s now available online. You can watch it on the Scott SWCD’s YouTube channel here!

Salt smartly this winter. Did you know it only takes 1 teaspoon of salt to permanently pollute 5 gallons of water? Winter salt use is a major contributor to salt pollution in our freshwater lakes and streams. The good news is simple winter maintenance strategies can protect local freshwater from salt pollution.

Learn how to save money, reduce your salt use and protect your property from salt damage while keeping your driveway clear and lakes & streams clean! 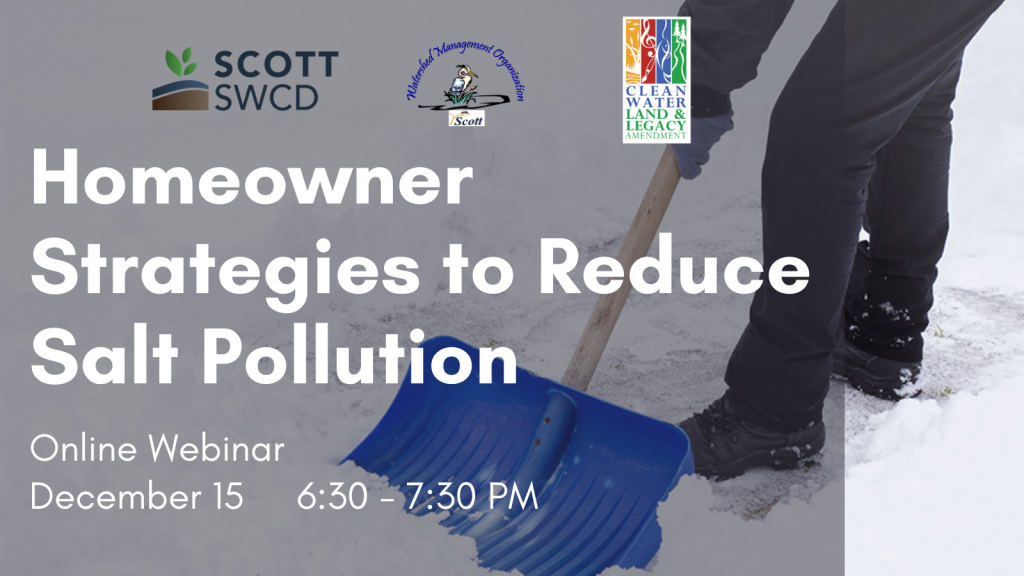 The event will be held via Zoom on December 15th, from 6:30-7:30 PM. To register, call the Scott SWCD Education Specialist, Shelby Roberts at 952-492-5448 or click HERE to register online. Pre-registration is required.

This article was written by Maggie Stanwood and was originally published in the January 12, 2019 edition of the Prior Lake American.

Each winter, hordes of maintenance workers across Minnesota venture into the cold to combat the threat of ice on roads, sidewalks and parking lots with rock salt — too much, in fact, some experts say.

The rock salt, an unrefined version of table salt, dissolves into its separate ions — sodium and chloride — when it meets water in one form or another. The chloride then remains there, traveling with the water through the environment.

Therein lies the problem. Once the chloride is in the water, there’s no feasible method to remove it. And too much salt in a freshwater system can wreak havoc, said Scott County Natural Resources Senior Water Resources Planner Melissa Bokman.

“It affects aquatic fish, aquatic bugs, amphibians; it affects plants,” Bokman said. “It can stay in the soil. It affects your pets. There’s a lot of problems with salt.”

Three bodies of water in Scott County are on a federal impaired waters list for containing too much chloride: Credit River, Sand Creek and Raven Stream.

The county, municipalities and watershed districts are attempting to keep the other bodies of water in Scott County off the list by hosting free winter maintenance workshops for contractors, property managers, school district staff and volunteers who are responsible for maintaining roads and walkways in the winter.

The first workshop is on Jan. 16 from 8 a.m. to 1 p.m. at the Spring Lake Township Hall on Fairlawn Avenue. The free workshops will be held every couple months through this year. (The next Parking lot & Sidewalk workshops are August 23 & Oct 22).

“A lot of people don’t know how much salt they should be using,” Prior Lake-Spring Lake Watershed District Water Resources Outreach Specialist Kathryn Keller-Miller said. “They’re worried about liability, so they’ll put down extra just in case because they don’t want there to be ice, but in reality they’re using way more than they need to. These workshops came out of that.”

The presentations will be conducted by Fortin Consulting staff as well as a member of the winter maintenance industry so attendees can hear both the science and the practicalities of how and why to reduce salt use, Fortin Consulting Founder Connie Fortin said.

“My company felt like salt was an overlooked pollutant,” Fortin said. “We felt if they understood the serious consequences of putting salt in the water and if we gave them practical things to do to lower salt use that we could get them on our team and move the industry forward.”

For a water body to be considered impaired in regards to chloride pollution, there can be up to 230 milligrams of chloride per liter, which is equivalent to one teaspoon of salt in a five-gallon bucket of water.

“We say, what if you could use one less teaspoon. That would be easy, and you would save five gallons of water from being permanently polluted,” Fortin said.

A University of Minnesota study found that 78 percent of salt applied in the Twin Cities metropolitan area in the winter made its way to groundwater, lakes or wetlands, according to the Twin Cities Metropolitan Area Chloride Management Plan from February 2016.

“Once chloride is in water, the only known technology for its removal is (reverse osmosis) through massive filtration plants, which is not economically feasible,” the report states. “This means that chloride will continue to accumulate in the environment over time.”

Fortin said the methods suggested at the workshop are geared toward workers limiting salt use as much as possible, such as driving slower when applying salt so the dry rock salt isn’t wasted by bouncing off the road.

Because rock salt is not effective if pavement is 14 degrees or colder, the workshop suggests using a different solution or chemical if it’s colder than that.

Liquid mixtures, while not as effective as rock salt, act faster on ice and snow and are about 77 percent water, leading to less environmental damage, Fortin said.

“We look at those different strategies of what chemicals, what spread patterns, what strategies can we use so we use the smallest amount necessary,” Fortin said.

While the workshop is not geared toward residents, residents can also reduce their salt use. Water softeners, for instance, use sodium to remove minerals from water.

“All that soft water eventually gets into our streams and our lakes,” Bokman said.

Residents can also be less zealous on removing 100 percent of ice from sidewalks with ice. If traction is needed, granite pieces or chicken grit can be thrown down and re-used later.

“It’ll give you grip on the ice and give you traction, but you wouldn’t need to use the salt,” Keller-Miller said. “Some people use sand, but sand isn’t always the best because that also washes down the drain and can cause turbidity issues with the water.”

There’s also the good old-fashioned shovel and supporting a municipality or contractor deciding to use less salt, Fortin said.

“Be more encouraging and tolerant as the industries are trying to change,” Fortin said.

Pre-registration is required for the workshops. Those wanting to participate can register by emailing mbokman@co.scott.mn.us or by calling 952-496-8887.

This workshop will cover best management practice for managing snow and ice on parking lots and sidewalks to help you save money, time and protect the environment. An option to earn the MN Pollution Control Agency (MPCA) Level 1 Certification in Snow & Ice Control Best Practices is available.

Workshop is free but pre-registration is required; email mbokman@co.scott.mn.us or call 952-496-8887.