Hurricane Harvey just dropped unprecedented amounts of rain in Texas. The huge amount of rain dropped by Harvey was partially a result of the effects of climate change. Human produced emissions of greenhouse gases (like carbon dioxide and methane) have caused a small but significant rise in global temperatures. This, in turn, resulted in warmer than normal water temperatures in the Gulf of Mexico which fueled Harvey, feeding the storm more energy and precipitation and brought greater devastation to Houston. 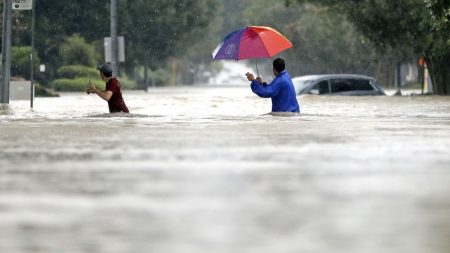 But- this isn’t just a Houston problem. Here in Minnesota, we are also experiencing increasing frequency and intensity of rainstorms (Source: MPCA). We should take this opportunity to look at how prepared our own local communities are. Are we building our communities to be resilient to climate change ? If not, we’d better get started. We have a choice to make, so let’s choose success.

The following is excerpts from an excellent article published by Politico on August 28th, 2017. The article was written by Eric Holthaus. You can read the full story here.

In all of U.S. history, there’s never been a storm like Hurricane Harvey. That fact is increasingly clear, even though the rains are still falling and the water levels in Houston are still rising.

Harvey is the third 500-year flood to hit the Houston area in the past three years, but Harvey is in a class by itself. By the time the storm leaves the region on Wednesday, an estimated 40 to 60 inches of rain will have fallen on parts of Houston. So much rain has fallen already that the National Weather Service had to add additional colors to its maps to account for the extreme totals.

Houston has been sprawling out into the swamp for decades, largely unplanned and unzoned. Now, all that pavement has transformed the bayous into surging torrents and shunted Harvey’s floodwaters toward homes and businesses.

While Harvey’s rains are unique in U.S. history, heavy rainstorms are increasing in frequency and intensity worldwide. One recent study showed that by mid-century, up to 450 million people worldwide will be exposed to a doubling of flood frequency. This isn’t just a Houston problem. This is happening all over.

A warmer atmosphere enhances evaporation rates and increases the carrying capacity of rainstorms. Harvey drew its energy from a warmer-than-usual Gulf of Mexico.

Weather patterns are also getting “stuck” more often, boosting the chances that a storm like Harvey would stall out.

To be sure, a storm like Harvey might have been possible in the absence of climate change, but there are many factors at play that almost assuredly made it more likely.

If we don’t talk about the climate context of Harvey, we won’t be able to prevent future disasters and get to work on that better future.

The symbolism of the worst flooding disaster in U.S. history hitting the sprawled-out capital city of America’s oil industry is likely not lost on many. Institutionalized climate denial in our political system and climate denial by inaction by the rest of us have real consequences. They look like Houston.

The rebuilding process provides an opportunity to chart a new path. The choice isn’t between left and right, or denier and believer. The choice is between success and failure.