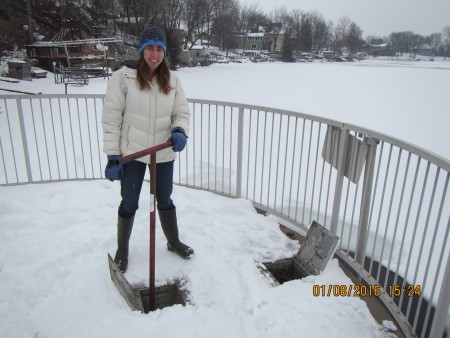 Unseasonably warm temperatures coupled with several rainfall events have resulted in unusually high water levels on Prior Lake for this time of the year. As of December 21, Prior Lake was at 902.91 feet and water was cascading over the Prior Lake Outlet Structure, which is set at 902.50. Since the Outlet Structure and Channel was installed in 1983, records indicate there were only three other instances where the water level exceeded 902.7 in December.

Greg Wilson, the consulting engineer on the City’s and District’s Stormwater Management and Flood Mitigation Study, ran a new Hydraulic and Hydrologic Model to determine the benefit of opening the Outlet Structure’s low flow gate, which can draw the lake down to 902.0 feet. Opening the gate speeds up the flow of water that heads down the seven plus mile channel that outlets into the Minnesota River. Measurements taken by District staff last week indicate that many lakes, ponds and wetlands may be nearly full now and may not have much storage capacity if the area experiences appreciable rain or significant snowmelt runoff in the spring. Lack of water storage increases the risk of flooding.

After running the model, Mr. Wilson recommended that the District apply to the Minnesota Department of Natural Resources for a permit to temporarily open the low flow gate. Permission was granted to open the gate until the water level on Prior Lake reaches 902.50. District Staff opened the low flow gate at 12:45 p.m. on Monday, December 21.