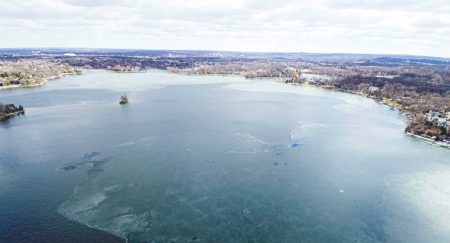 2021 ice out in progress on Lower Prior Lake. Photo: Mike Thibault, VidPix Drones

As of March 29, the ice is off all District lakes! On March 21 Sutton Lake was the first lake to report ice off for 2021. Upper Prior was the last to see ice out, reporting ice off on March 29. The District considers lakes ice off once the lake is at least 90% ice free. A huge thank you to our volunteer ice observers who send in ice reports and let us know when the lakes ice out! If you are interested in joining the ice observer list, email Patty at pdronen@plslwd.org.

2021 ice out dates for District lakes:

This year the lakes iced out roughly the same time as they did last year. While it is not uncommon to see ice out in March, lake ice out has been trending earlier in the season over the last several decades with lakes losing about a week of ice coverage in both the spring and the fall as a result of Minnesota’s rapidly warming winters.

You can view the District’s record of historical ice on and off dates here. The DNR has a statewide ice out map with current and historical ice information here.