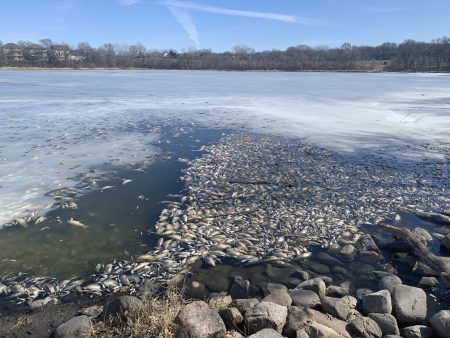 The MN DNR took fish samples from the fish kill to run tests to investigate potential causes of the fish kill. Initial findings noted gill necrosis and a heavy load of flavobacteria which is consistent with fish who have Columnaris disease. The DNR is still doing other tests to confirm. Columnaris disease is caused by a bacteria that is constantly present in fish populations, but does not typically cause death except when fish are stressed, such as during spring spawning season.

DNR staff collected fish samples on 9/5/18, which will be tested for disease. Results of these tests will take at least a week.

A dumpster, donated by Buckingham Companies, will be placed at the Spring Lake boat launch today by 5pm for fish disposal only and the Organics Recycling Facility at Shakopee Mdewakanton Sioux Community will dispose of the fish at no cost. Please put ONLY fish (no plastic bags) in the dumpster.

The District has received several reports from residents of a fish kill on Spring Lake. According to MN DNR Fisheries staff, the fish kill is likely a result of late summer lake conditions and weather. Low oxygen conditions are the most likely culprit that is causing the fish to die. During this time of the year, there is a high biological demand for oxygen in the lake, as many fish and other organisms are active and consuming oxygen, so competition for oxygen is high in the lake. Different fish species have varying oxygen needs and tolerance of low oxygen levels.  Samples taken on August 28 revealed dissolved oxygen levels around 5 mg/l on the top half of the lake, which is the minimum level required for a healthy fish population.  The bottom half of the lake was considered anoxic, or without oxygen.

After having quite a long period with no rain and hot weather, and then getting quite a bit of rain over the last week or so rain. That rainwater was colder than the lake water and because colder water is more dense, the rainwater sunk to the bottom of the lake, displacing the oxygen-poor water which was previously at the lake bottom. As the oxygen-poor water moved upwards, some fish could have been caught in the oxygen starved water, causing them to receive an insufficient amount of oxygen and die. Some deoxygenated water from surrounding wetlands may also have been pushed into the lake causing the dissolved oxygen (DO) levels to be lowered. There are a couple factors that could have caused the low DO levels, but hopefully with cooler temperatures and wind, the lake DO levels will increase.

Based on resident reports, only crappies have been found in the fish kill on Spring Lake. Consequently, it is unlikely that the kill was caused by a toxic spill, as a toxic spill would have affected all fish species. The current Spring Lake fish kill is most likely a result of natural causes due to low oxygen levels stemming from late summer lake conditions and weather.

Fish washed up on my shoreline. What can I do with them? While the fish are ultimately individual landowners’ responsibilities, the District has coordinated a dumpster with Buckingham where residents can drop off dead fish from their shorelines. The SMSC’s Organics Recycling Facility in Shakopee has agreed to take the fish. The dumpster will be at the Spring Lake boat launch off of Vergus Avenue and will be available beginning Sept 6th by 5 pm.

How to Report Fish Kills: If you observe large fish die-offs on any of the lakes you can report any findings on the U of MN’s fish kill reporting map. The fish kill map is a tool created by Dr. Nick Phelps to identify fish kills in Minnesota and allows you to identify the date, location, approximate number of fish and condition of the fish and note if anything about the fish looks abnormal. UMN researchers may then investigate the kill and gather specimen samples for the UMN veterinary diagnostics laboratory. UMN staff also share reports with MN DNR staff.

Photo was taken by Spring Lake resident, Jeff Will.

Shortly after Memorial Day, watershed residents often begin to observe fish die-offs in local lakes.  This was a common sighting in the lakes around Scott County during late spring/early summer in previous years.  In 2014, testing confirmed that columnaris bacteria was the cause of the die-offs in Carls (McMahon) and Cedar Lakes, and it is suspected that this bacteria was also the likely cause of the die-offs seen in lakes around the area.

As we approach the same season this year, it is important to keep in mind that the die-offs caused by Columnaris disease are a natural occurrence and only affect a small percentage of the fish populations in our lakes.  There is no known cure, but is believed to have little effect on the long-term health of fish populations.