The Prior Lake-Spring Lake Watershed District

The Prior Lake-Spring Lake Watershed District (PLSLWD) was established on March 4, 1970 by order of the Minnesota Water Resources Board (MWRB) under the authority of the Minnesota Watershed Act (Minnesota Statutes, Chapter 112). The order was in response to a petition filed by resident landowners within the watershed on June 24, 1969. This citizen petition sought establishment of the District for the purposes of wisely managing and conserving the waters and natural resources of the watershed. 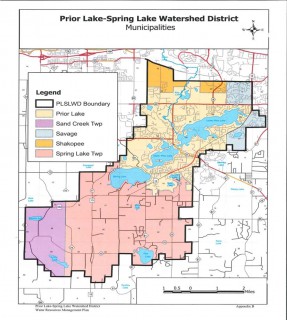 The PLSLWD is approximately 42 square miles in size and is located in north central Scott County, Minnesota, encompassing parts of the cities of Prior Lake, Shakopee, and Savage and parts of Sand Creek and Spring Lake Townships. In addition, a portion of the Shakopee Mdewakanton Sioux Community tribal lands are located within the District.

The PLSLWD is administered by a five-person Board of Managers (Board) appointed by the Scott County Commissioners. All of the District’s policies, goals, and accomplishments are directed by the citizens who serve on the Board.  The Board of Managers meets the second Tuesday of the month at 6:00 PM at the Prior Lake City Hall. Manager duties include: adopting and implementing the Water Resources Management Plan and rules and regulations; establishing an annual budget; preparing an annual report and audits; establishing a citizens advisory committee; initiating projects and maintaining and operating existing projects.

Watershed districts are funded through an ad valorem tax.

The Minnesota Board of Water and Soil Resources (BWSR) approved the District’s fourth generation Water Resources Management Plan (WRMP) on June 24, 2020 and the District Board adopted the plan at its July 14, 2020 meeting.  A copy of the 2020 WRMP is available on the District website.

The 2020 Water Resources Management Plan will guide District activities from 2020-2029, providing a road map for the next 10 years and outlining all of the District’s activities, programs and projects for the next decade. The three main areas of focus for the District are water quality, water quantity/flooding and aquatic invasive species (AIS). The 2020 Management plan For more details visit the 2020 Management Plan page on our website.

It is important to note that planned expenditures are not the same as budgeted expenditures; the District is not bound to spending precisely what is included in the plan. Rather, these are projections of the upper limit of what the District would spend in a given year.  Project funding could be reduced or removed based on the outcomes of feasibility studies.  Alternatively, new projects could be added or funding increased, but that would require another plan amendment.  Finally, planned expenditures are not the same as the annual tax levy.  Other sources of funding, such as cash reserves, grants, or participation from other project partners, could significantly reduce the levy amounts from the budgeted expenditure (which itself could differ from the planned expenditure).

Lake associations initially petitioned the PLSLWD to construct an outlet to carry stormwater from its landlocked lakes in 1973. This lead to the development of the Prior Lake Outlet System, which receives water from Prior Lake and the surrounding watershed and transports it to the Minnesota River. More information about the history and management of this system can be found on the Outlet Channel page of our website.