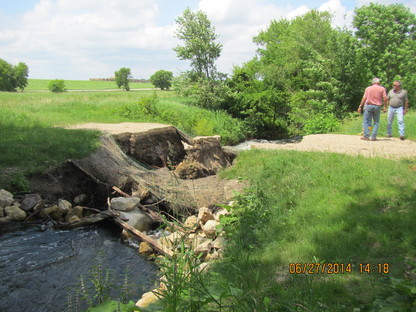 As if starting her new job as the District Administrator for the Prior Lake-Spring Lake Watershed District just one month before a nearly 60-year flooding event wasn’t difficult enough, little did Diane Lynch know that she would still be working on flooding damages nearly four years later. Over 13 Inches of rain fell over a short period in June, causing local flooding of homes and streets and overwhelming the Prior Lake Outlet Channel.

The Prior Lake Outlet Structure and Channel was built in 1983 primarily for stormwater conveyance for land-locked Prior Lake in Scott County. The part constructed/part natural channel meanders its way over 7 miles to the Minnesota River.
During the June 2014 rain events, it is estimated that the lake level of Prior Lake could have reached approximately 912.26 feet without the outlet structure; whereas it peaked at…
906.17 (compared to an ordinary high water, or OHW, of 903.9). During this time, the channel suffered extensive damage from downed trees, major bank erosion and formation of a large sediment delta.
All of this damage was estimated to cost nearly $1 million. The downed trees, culvert and sediment delta repair projects are completed. The bank erosion project is now underway and all projects received FEMA funding.
Several months after the flood, the City of Prior Lake and the District met to develop plans that would help mitigate the impacts of future flooding. The Stormwater Management and Flood Mitigation Study process was created and implemented in cooperation with Spring Lake Township beginning in 2015 and was completed at the end of 2016. Barr Engineering was retained to conduct the study, which included updating the modeling of the watershed, reviewing flood-related issues and projects, identifying and evaluating potential flood reduction strategies, and recommending implementation options.
Planning Process to Reduce Future Flooding Impacts
Public Outreach
Public outreach was an integral part of the study. There were three public input meetings; two Advisory Group meetings (representatives from community groups); two Joint Policy Group meetings (elected/appointed officials from the City, Township and District) and one Farmer Listening Session. 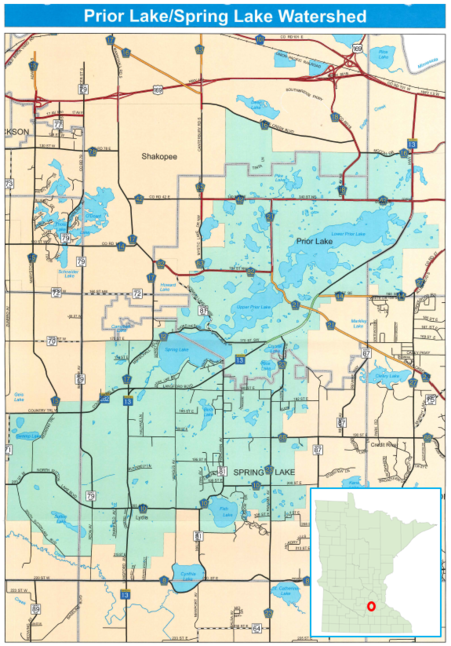 Narrowing the Options
Out of 20 viable alternatives that were investigated, the Policy Group selected three that met the following goals: to protect public safety and maintain emergency access, to protect public utility infrastructure, to maintain traffic flow through the County Road 21 corridor, and to maintain access to private properties.
The three alternatives selected were:
The City of Prior Lake created a Flood Response Policy designed to protect public safety by implementing protective measures triggered at critical Prior Lake levels, such as deploying signs and equipment, offering sandbags for sale, and deploying temporary flood protection measures in critical locations.
Actively managing the Prior Lake Outlet was the responsibility of the District. Therefore a procedure was developed to analyze weather forecasts, storage capacity of existing wetlands and lakes, and consider flooding potential. The DNR-approved Manual was updated to allow the Outlet Structure’s low flow gate to be opened more often, not just in response to spring snowmelt.
Securing upper watershed storage was the responsibility of the District. Potential flood storage areas were identified that could provide flood damage reduction in addition to providing water quality improvement benefits. Potential storage areas are currently being carefully considered where landowners are willing partners.
See the full Prior Lake – Spring Lake Watershed District Stormwater Management and Flood Mitigation Study for more information about the project.
Flood Study, flooding