While District lakes finally iced-out last week, it sure was an interesting ride getting there! This spring’s weather led to some unusual patterns across Minnesota. Winter clung on this year with more than one unexpected and significant snowstorm in April.

Normally, the lakes in southern Minnesota melt first, while the lakes up north are generally the last to ice out. Not so this year! Why? Thanks to April’s two feet of snow that pounded the Metro and southern Minnesota.  This snowfall largely missed northern Minnesota, giving the ice on the northern lakes a head start. Thus, quite a few lakes in northern MN iced-out before those farther south!

The top map shows 2018 ice-out dates, while the colorful map on bottom shows the 2017 ice-out date. As you can see, last year ice out marched from south to north like usual. This year when ice-out did happen the whole state practically iced out at once with lakes from southern, center and northern Minnesota icing out the same week (April 29-May 5). Some lakes in very northern Minnesota are still waiting for ice-out. Last year, ice-out occurred very early. This year was the complete opposite.  Instead of setting record early ice-out dates, lakes all over the state have been setting record late ice-out dates. Psst..you can find these interactive maps for both current and past years on the DNR’s website: www.dnr.state.mn.us/ice_out/index.html?year=2018. 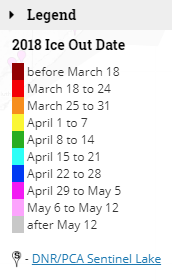 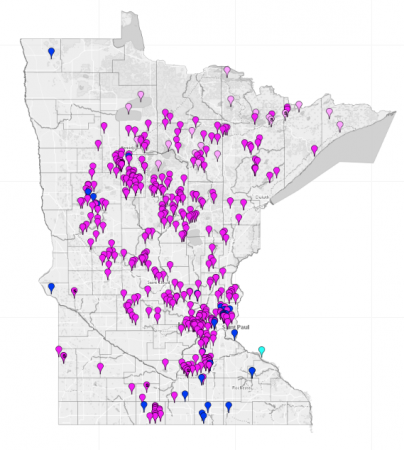 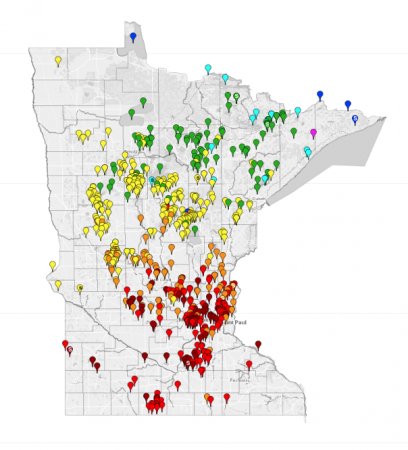 However, once the snow melted, the ice went fast! Many lakes went from 20 inches of ice to ice-out in just over a week! That’s crazy fast.

Want to help report ice-out on our lakes? Email jrockney@plslwd.org to be added to our volunteer ice observer email list.
Lake, ice, ice-out