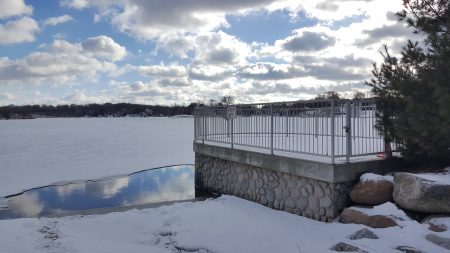 The City of Prior Lake and Prior Lake-Spring Lake Watershed District (PLSLWD) staff continually monitor local conditions including winter snowpack, precipitation, and lake levels to assess flooding risk. Early spring is one time of year when flooding potential receives some extra attention. According to the National Weather Service office in Chanhassen, the weather outlook and the potential for snow or rain are the biggest wild card every year. At this point, additional rainfall would be the main spring flood driver.

Based on an analysis done by City staff, there isn’t a strong correlation between the lake level at ice-out and the eventual high-water elevation for Prior Lake in any given year. For example, in 2014 the early spring level for Prior Lake was very close to the long-term average of about 901.6 on April 20; the record flooding level of 906.17 recorded on June 30 was caused by above-average rainfall events over a period of a few weeks in May and June. Other years, such as 2001, start out with high lake levels (902.75 on 4/15/2001) but the lake’s high-water level for the year is recorded shortly thereafter (904.33 on 4/30/2001); in that case melting snow likely contributed to the high-water levels.

CURRENT CONDITIONS AS OF APRIL 23, 2018:  There is currently very little snowpack in the watershed above Spring Lake and Prior Lake after the warm weather this past weekend. Lake levels are rising and will continue to rise as the last of the snow melts.  The water level of Prior Lake was 902.89 on April 23 which is slightly above the long-term early spring average of about 902.6. The lake continues to discharge through the Prior Lake Outlet Channel and the PLSLWD has had the low-flow gate on the outlet structure open since March 29, which allows the lake to draw down as fast as possible. Previous lake level updates can be found at the end of this article. Current lake levels & discharge rates can be found on our website on the Prior Lake and Spring Lake pages.

Note: The Ordinary High Water level is an elevation delineating the HIGHEST water level that has been maintained for a sufficient period of time to leave evidence upon the landscape and often is indicated by a change in vegetation type. It is not the flood elevation.

Levels of Prior Lake are highly influenced by the amount of water coming in from Spring Lake.  As water levels on Spring Lake continue to drop, so will Prior Lake.  However, with the lakes being ice covered, lake levels will drop more slowly than summertime because no evaporation is occurring.  In addition, the snowmelt in the immediate watershed can affect lake levels until the snow is gone.

Our average annual precipitation is about 31.1 inches and the 365-day precipitation sum (amount of water we’ve received since this time last year) is well above average at about 38 inches. There is a lot of water in the system; upstream storage areas (ponds, wetlands, depressions) may be close to capacity, and when combined with frozen soil conditions, this can lead to high runoff levels every time we get more precipitation. The risk for spring flooding and higher lake levels still depends on the precipitation we may receive. The National Weather Service in Chanhassen, in their most recent Spring Flood Outlook Update on 4/12/2018, stated: “…river levels will rise over much of the area…any further rainfall would increase flood potential.” Staff will continue to monitor the situation.

In 2017, the City Council adopted a Flood Response Policy outlining the City’s response to flooding within the City. The PLSLWD completed an update of its Outlet Control Structure Management Policy & Operating Procedures, which gives the PLSLWD more flexibility in opening the structure’s low-flow gate.  In addition, the District is identifying and working with landowners on potential upper watershed storage sites. According to the recently-completed joint Flood Study, these short-term flood solutions are needed in combination with long-term upstream water storage efforts led by PLSLWD to help reduce potential flooding impacts on our residents and businesses.

CURRENT CONDITIONS AS OF APRIL 18, 2018:  There is currently some snowpack in the watershed above Spring Lake and Prior Lake, although the levels will decrease daily with forecasted warmer weather. The water level of Prior Lake was 902.84 on April 18 which is slightly above the long-term early spring average of about 902.6. The lake continues to discharge through the Prior Lake Outlet Channel and the PLSLWD has opened the low-flow gate on the outlet structure, which allows the lake to draw down as fast as possible.  This draw-down is usually only allowed by the DNR in springtime, to reduce flood potential.