Wow, that sure went fast! Running 10.3 degrees warmer than average, February’s unusually warm weather* started melting the lake ice early this year. February was the 18th straight month that was warmer than average in the Twin Cities, which has never happened here in 143 years of record keeping (for more see Huttner’s article**). 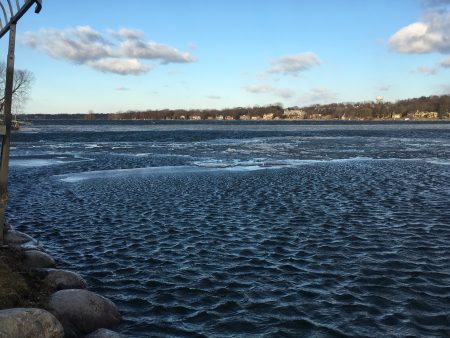 Prior Lake ice-out. Photo credit: a resident on Paradise Bay.

The one-two punch of warm February weather, followed by a couple of crazy windy days chased the ice right out of town. This year, Haas, Spring, Pike and Fish were declared ice-out on March 7th. Lower and Upper Prior were close behind, reaching ice-out only a day later on March 8. As smaller lakes usually melt first it was especially strange that Buck Lake held out, not seeing ice-out until March 25th. Lakes are considered “ice-out” when more than 90% of the lake is ice-free.

In a strange twist, cold weather returned and the ice was back on all of the lakes less than a week after the first ice-out. This unexpected development sent agencies across the state scrambling to determine which date should be considered the official ice-out date. Even long-tenured staff could not recall any other year in which the ice refroze after the initial ice-out. Upon consideration, DNR Climatology staff decided that the last ice-out date is considered the official ice-out date, but the first ice-out date should also be noted.