Splish, splash, have the carp been taking a bath? Nope! The carp may have been splashing up a storm in May and June but they were spawning, not taking a bath. Like most fish, spring is spawning time for carp once the water warms up. We’ve been busy keeping tabs on the carp with help from our partners, Tony Havranek and Mary Headrick at WSB & Associates. 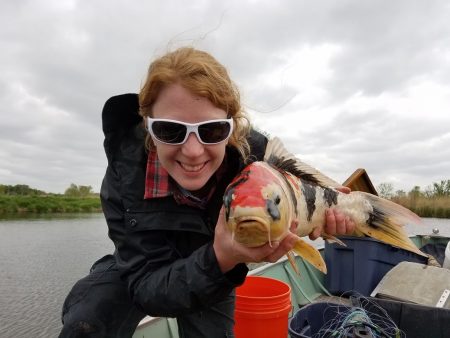 Figure 1. Mary Headrick, one of our carp gurus from WSB, with a koi carp caught on Spring Lake. The koi carp was likely released into the lake. Never dump fish from aquariums or private ponds into local lakes or wetlands.

During the spawning season, the carp were tracked about once per week in order to identify their spawning areas (check out the Where are the Carp? page to see where the carp have been). A carp barrier was installed this spring on the culvert in the connector channel between Upper Prior and Arctic Lake to prevent the carp from entering Arctic Lake. Some carp were aggregated in Upper Prior’s Mud Bay near the channel to Arctic Lake and may have intended to travel to Arctic to spawn but were prevented by the carp barrier. However, carp were seen to be spawning in the southwestern bay of Upper Prior. Some of the carp from Spring Lake were spawning in the desiltation pond in the wetland area just southwest of Spring Lake.

As a result of tracking this winter, we were able to identify two overwintering spots for the carp on Spring Lake: one on the western side of the lake and the other in the eastern bay. The carp on Prior Lake were tagged later in the year and their overwintering spots will be identified next winter. Locating winter aggregation areas in the lakes will help us identify potential winter seining sites to successfully remove a portion of the carp population. 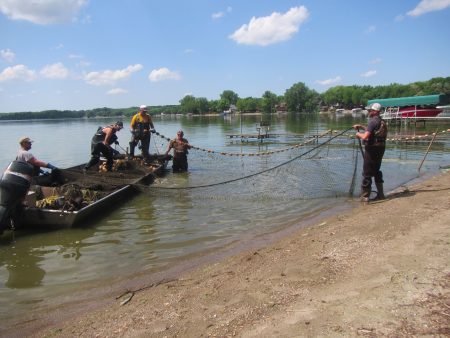 Figure 2. Using a seining net to catch carp; the carp were marked and then thrown back into the lake and will be used later to help estimate the carp population. Tony, our carp expert from WSB, is on the right.

Figure 3. The proportion of marked carp captured during the second sampling can be used to calculate an estimate of the total population size. Source: Australian Academy of Science.

We have nearly completed the first year of our three-year carp management grant. This year we will work to obtain a population estimate of the carp population in Spring and Prior Lake and will likely need to mark more fish in order get a good estimate. We will also continue to track the carp locations but now that spawning is finished, we will only track the fish about once a month over the summer. Four possible locations for carp barriers are being explored and carp barrier designs will also be researched. If conditions allow, we may begin carp removal later this year as well. Contact Maggie Karschnia at mkarschnia@plslwd.org with questions regarding carp management or if you are interested in volunteering at future seining events.

Funding for this project was partially provided by the Minnesota Pollution Control Agency through a Grant from the State’s Clean Water Partnership Grant Fund.