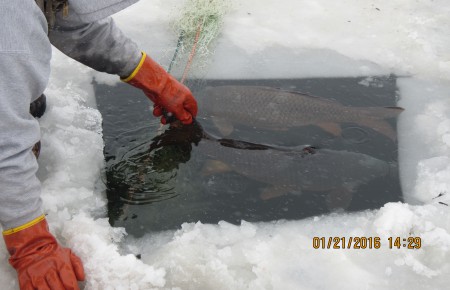 Releasing radio tagged carp on Prior Lake in January 2016.

Last week the stars finally aligned for carp tagging on Prior Lake. After several unsuccessful attempts since November to capture fish on Prior Lake for radio tagging, conditions and carp both cooperated last week. Eight carp on Prior Lake were caught and implanted with radio-tags as part of a three year carp management project. In addition, seven carp on Spring Lake were tagged in November, bringing the total of tagged carp in the two lakes to fifteen. An additional fifteen carp will be tagged later in 2016. Be sure to check out our Where are the Carp? page to track the movements of the carp throughout the lakes!

The radio-tags will allow the District to track the movements of the invasive carp throughout the two lakes. The goal is to learn where the carp congregate in the lake and surrounding streams throughout the year. This will allow future carp removal efforts to be more successful as we can target areas where we know the carp are congregating. If conditions allow, a winter seining will be done on Spring Lake this year to remove carp from the lake.

Funding for this project was partially provided by the Minnesota Pollution Control Agency through a Grant from the State’s Clean Water Partnership Grant Fund.