Across Minnesota, the heat is on.  As the dog days of summer approach, conditions are ripe for some of our lakes to produce cyanobacteria, better known as blue-green algae, which have the potential to be unsafe for pets and humans.

Blue-green algal blooms can occur on unhealthy lakes that are overloaded with high inputs of phosphorus and nitrogen from sources like fertilizer or wastewater. When there are excess nutrients in the water and the water temperature is high over a sustained period of time, these combined factors are the ideal breeding grounds for blue-green algae. Such high concentrations of excess nutrients can feed algal blooms and also increase the presence of microcystin, a toxic byproduct of blue-green algae, in surface water.

Blue-green algae were named after the cyan or blue-green pigment that it produces. When these algal blooms form, it often makes the water appear cloudy or scummy with a green, yellow, or bluish-green cast, and may resemble pea soup or look like green paint has spilled on the water surface. Lakes may also develop a swampy, septic or rotten egg-type odor as the algae accumulate in floating mats and decay. 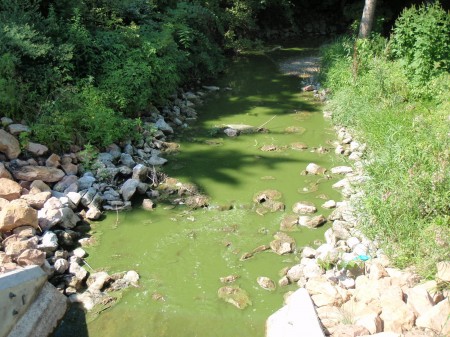 Blue-green algae blooms can vary in appearance, oftentimes resembling green paint or pea soup. This picture captured the presence of blue-green algae in the Spring Lake outlet to Prior Lake on August 13, 2012.

Blooms can occur any time of the year. Blue-green algae blooms are more common during the summer and early fall, but have been reported as early as April and as late as October. These blooms can decrease the amount of oxygen available for other aquatic organisms, produce bad smells, affect the recreational use of lakes, and harm human and animal health if microcystin is present.

The concentration of toxic microcystin in an impaired lake can vary greatly with time and location, and may appear quickly and then diminish. Even though it is known that blue-green algae produce toxins, this species may not produce toxins all the time. Blue-green algae conditions change rapidly and there is no instantaneous test that can be performed to indicate the presence of microcystin; and even after testing, if a bloom tests non-toxic, it may still have the potential to become toxic.

When cyanobacteria cells die, the toxin can be released into the water, and remain noxious for about a week. Over time, the toxins are then diluted and will eventually breakdown and disappear. Meanwhile, there is no visual way to predict the toxicity of an algal bloom, so the Minnesota Department of Health (MDH) recommends the following guidance: “When in Doubt, Best Keep Out.”

In August 2012, the Prior Lake-Spring Lake Watershed District collected a sample from the Spring Lake outlet to Prior Lake after receiving several phone calls from concerned citizens about the presence of algae there. The sample was tested and test results indicated that microcystin levels were 54 parts per million. While there is no formal microcystin monitoring program or health standards in the state of Minnesota, the test results from the Spring Lake outlet did exceed the suggested levels that put humans and animals at risk. 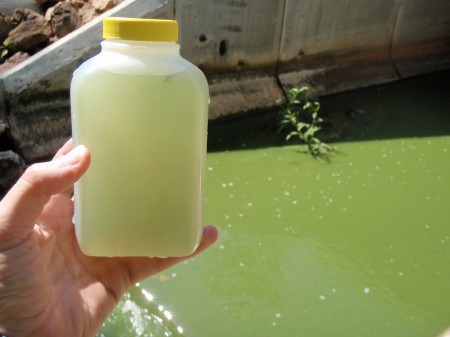 Pets are especially vulnerable to blue-green algae because they don’t instinctively avoid smelly, green water. Many dogs have gotten sick and in some cases have died as a result of drinking water from a water body contaminated with microcystin. Common symptoms of human exposure to microcystin include vomiting, diarrhea, fever, and cramps if ingested, or irritation to eyes, ears and throat if contact is made with skin. Seek medical attention immediately if you believe that you or your pets are experiencing adverse health symptoms due to contact with lake water and algae.

The Minnesota Pollution Control Agency (MPCA) and the MDH recommend the following actions if you have concern about lakes with algal blooms:

Finally, you can take action to reduce algal bloom frequency in your local lake. External nutrient sources containing phosphorus and nitrogen can easily leave your lawn through rainwater runoff and enter your local lakes and streams where it promotes the growth of harmful and smelly algae. By practicing lake-friendly lawn care practices, like limiting fertilizer use, picking up regularly after pets, and installing a raingarden or native shoreline buffer, you can maintain a healthy lawn and do your part for our local water resources.

For more information about microcystin and blue-green algae, please check out the MDH’s webpage.